by Bobbin Beam | Narration, Voice Over

My voiceover friend, Julie Williams sent me a copy of her latest audiobook she narrated and asked me  to  listen and review. I was much obliged!  So Here goes: And good luck to Julie on the Audie nomination for this effort. 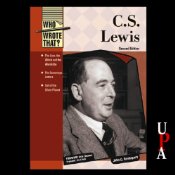 This book is a well crafted recount of the life of author Clive Staples Lewis. His “Chronicles of Narnia”, while probably his most high-profile work, is but one of many books he wrote, and is the culmination of an intriguing life’s journey.

C.S. Lewis’ biography takes on the life of a novel, with all its twists, turns, drama and resolution bringing the reader into the mind’s eye of Lewis.   C.S. Lewis was the younger of two boys born to indifferent parents in Belfast, Northern Ireland. He was close to his older brother and they filled their days spent reading from a vast home library with books and lived their early lives filled with fantasy.  After his mother’s death Lewis was sent away to school where the library became his sanctuary.

His lust for fantasy, the meaning of life, love, religion and various intellectual and personal influences took him on a journey into mythology, skepticism, mysticism, atheism, and finally, Christianity.

The facts of C.S. Lewis’ life as told by the author contain an interesting study in history, politics, religion and a tireless intellectual pursuit of truth. Lewis’ writing became more prolific and popular over time. The impact his various relationships, from his nurse, brother,  female companions, and later his close friendship with fellow writer, J.R. Tolkien draw the reader in to realize that C.S. Lewis did not just write children’s books, but a number of literary works and essays for all ages.

There are interesting facts to learn about C.S. Lewis’ life as well. The book’s narration by voice actor Julie Williams is well read and cast.  Julie’s approach to this third-person narrative style is smooth and sure, clearly drawing the listener in to the intriguing details of the creative writer’s life so that you’ll thirst for more. Her pacing, inflection, and diction are all spot on. Julie Williams’ narration of this book makes “C.S. Lewis” a wonderful and fascinating read.