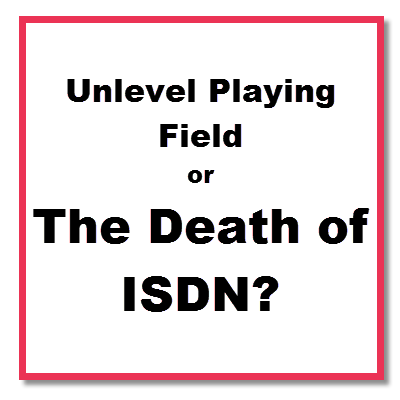 I rarely write about controversial things, but my blood is boiling and I’m sharing.

Many of you already know I’ve recently moved from San Diego to Milwaukee. I had ISDN in installed at my California house for about five years. I was paying about $50/month.

In preparation of the move I contacted the AT&T ISDN rep for the Midwest region who gave me a quote that made me gasp: $194 installation plus $214.00 per month. I swallowed hard but accepted the deal because ISDN work is a pretty consistent component of my voiceover business. I was told that ISDN in this region is now classified as a business account. Even though I have a friend about 50 miles north of me who’s paying $45/month for her ISDN service under a residential account, which I brought up to AT&T, they said she was grandfathered, and I didn’t qualify for that rate. Why? AT&T is working to phase out ISDN and it looks like the first target is the Midwest region. Indeed my installer was also surprised when I told him what I was going to be paying. He said that the service costs about $38, plus line charge, should be $45.  So why the disparity?

My friend up north’s personal ISDN  is grandfathered, and residential or personal ISDN accounts are no longer an option. They were discontinued July 16, 2012 in this region. Further, AT&T has a monopoly and owns most of the equipment . The Midwest Region includes Wisconsin, Michigan, Illinois, Indiana and Ohio. A survey of the bulk  my talented voiceover friends in this region are all paying about five times the cost for the service.  Clearly I feel at a competitive disadvantage to others who pay substantially less in other parts of the country, and the  grandfathered in-state accounts.

Some other friends in other areas of the country have Verizon and other ISDN service providers. Not in this region. We’re over the barrel as AT&T pushes the  envelope, in squeezing out small business, solo artists like me who’ll just throw up our hands and drop the service because it’s just to damned expensive. Bottom line….this is harmful to small business and AT&T doesn’t seem to care.

Everyone’s been talking forever about the death of  ISDN. I was told by AT&T that they are working to reduce their support of the infrastructure (two paired copper wires) and associated maintenance. I was also told yesterday by a rep at AT&T I may wish to consider Static IP if I can do it. Sure I can, but the studios need to change their standards. And that’s another conversation altogether.

My first bill was $551, including the first month, installation, plus all the taxes etc. Ugh! I paid it, knowing the next one would be a lot less. The second bill arrived, and it’s over $300, indicating a $50 per month increase plus plus….

I’m sick over this. And I’m analyzing what’s going on.

ISDN is old technology, but at the same time it’s highly reliable. It’s 40 years old. After AT&T was split up, the markets were fragmented with new service providers. But the telcos eventually lost a lot of land line accounts to wireless and fiberoptic technology.

AT&T is banking its future on fiberoptics. Why do you think they’re pushing U-Verse? But it still comes into your house on copper. In the meantime, a lot of my fellow voice actors are in pain over AT&T’s moves to push out ISDN users with the disincentive of simple price gouging. I’m calling it legal robbery.

Ultimately I believe  most ISDN voice talent are going to be facing big changes, sooner rather than later.

Next I’ll discuss alternatives, an action plan and possible solutions and work arounds.