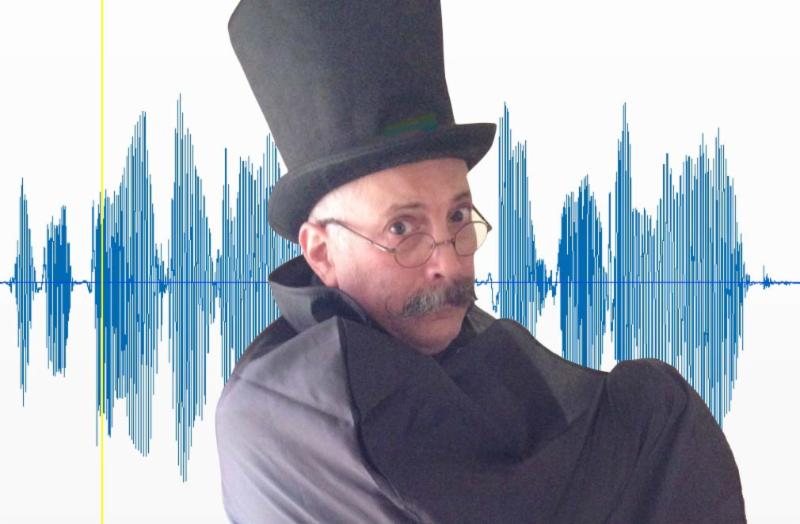 I have a treat for our voice acting readers today, as I ask my Friend and colleague, Dan Lenard some questions about life as a voice over talent , who knows much about voice acting, and as the Home Studio Master.

1. Give us a little insight into your background and events that lead you into voice acting.
It’s a long and complicated story. Suffice to say, I always wanted to be a voice actor since I was about 16. I had a keen interest in acting, sound recording and filmmaking in high school. I actually learned how to edit sound from my experience with editing film. Its the same theory. Continuity and natural transitions. I studied broadcasting at Buffalo State College College and earned a BA in that in 1979. I immediately was hired by a station in Buffalo and spent 13 years in radio and television, working for various stations in on-air, production, booth announcing  and management positions.
I got out of radio in 1992 and went reluctantly into the life insurance business (To earn a living) from 1992 until 1996 and learned a great deal about a lot of things; Sales, marketing networking, creating presentations and a great deal about health issues. I hated it, but was good at it.  I went back to Buff State in 1996 to earn a New York State Teachers Certification in social studies education and in 1998 immediately found work in a rural Western New York District. I found I really enjoyed teaching American history. I also built the district a TV studio and taught a course in TV production. That’s what I was meant to do. Circumstances, local attitudes and politics saw me leave that district for a more urban one, and I continued to find that our public schools are run by people with little interest in education, and lots of interest in keeping their jobs. You can’t take someone who’s worked in the private sector for 20 years, throw him into a socialist bureaucracy, and then expect things to work out. It was a real eye opener.
I found myself at home as a stay-at-home dad in 2002. I received my MS Creative Studies in 2003 and began looking at reviving my voice acting and audio engineering career. My timing was good. It was the dawn of the internet and home studio based voice over model. I found my niche in longer format narration and have done that successfully since.
2. When did the Home Studio Master aspect of your business model take form?
When blogging and online forums began to evolve in 2004 & 2005, because of my background in audio engineering, I found myself responding to a lot of the same questions we see today on the forums. “What mic should I use?” “How do I create a home studio?” etc.  Those lead to longer e-mails and relationships of advice and collaboration. My wife Marcy, who has an MBA from Emory, made it clear that I couldn’t just give 30 years of professional knowledge away, and we started to organize my home studio consulting business. What started as a book on the subject became a column for Voices.com blog called “Master VO,” where I answered peoples questions on home studios in an Anne Landers style. It was very popular.

I spent several years working with Nancy Wolfson, working on my voice acting style and in marketing myself. She began to refer her other students to me to help them set-up their home studios. Referrals from others instructors and colleagues began to flood in. I established the brand of “the Home Studio Master” after working with many people in many various home studio configurations and situations. After doing this for 7 years I can say that I’ve worked with hundreds of voice actors and have more experience in these unique environments than anyone on the planet. I learned that simple is best. To many people over think the whole process.
I met “Home Studio Engineer To The Stars,” George Whittam at VOICE 2008 and we began to collaborate on webinars and and cross consulting on various projects. Our philosophies merged into one of “keep it simple” for beginners and instruct more experienced practitioners on the finer points of audio production.  That lead to our successful, live webcast, “East West AUDIO Body Shop,” which is a story for another time. Suffice to say its more fun than anything I’ve ever done.
3. Tell us about your own home recording setup; what gear do you have and describe your audio recording chain.
I practice what I preach about simplicity. It starts with a good sounding room. I have an office with a Studio Suit treated 4 1/2′ x 3 1/2′ closet that I use for isolation. I have good mics that I know how to use; a Neumann TLM 103 and a Sennheiser 416 shotgun mic. They have their uses in specific situations. Those are connected by XLR cables to a Focusrite Scarlett 2i2 interface. Thats connected to a Mac Mini running Mountain Lion. I use Adobe Audition for Mac and Twisted Wave to record edit and process my audio. No front-end processing.
4. You were heavily involved with Voice Over Virtual, the first online virtual web conference for voice over talent. What was your role ?
Voice Over Xtra publisher John Florian hired me to produce all the video seminars from the more than 50 presentations. I was responsible for establishing format and content criteria. We wanted to have as visual a presentation from our presenters as possible. The audio quality was also vitally important. I received all the presentations, checked them for video and audio quality, dealt with any issues in regards to those, and uploaded them to Voice Over Virtual platform. It involved a lot of troubleshooting and helping less experienced PowerPoint, Keynote and video users create their presentations. It was mostly getting them to animate their text and adding as many visuals as possible. Screen capturing of these presentations seemed to be a big issue to many as well.5. What is a typical day in your work life like? Do you have a routine?
Get up, drink coffee, eat breakfast. Drive my son Jacob to school, get in the studio around 8:00-8:30, Check e-mail, set daily production schedule. Record, edit, audition when they come up. I also have appointments with home studio clients who have tech problems or need be taught some of the basics of how to have a home studio. East West AUDIO Body Shop also takes prep time, especially on Monday as we prepare to go live Monday night.  Also weekly production of my Tips Of The Week for EWABS takes up time as I write, record and edit those.
I also serve on several Boards including the Executive Board of World Voices Organization, our industry association, that everyone involved in voice work (Voice actors, coaches, technicians, producers and copywriters) should join.
Any final thoughts or advice you’d like to share with the readers of Bobbin’s Blog?
This is a business. Its art, but its professional art. It takes a triad of disciplines to succeed. First, you need talent. We all have the talent to do it. What one needs to succeed is developing and nourishing that talent. Never stop studying, practicing and auditioning. Second, Technology. You’re going to have to learn to competently record at home. Not just for auditioning. The right acoustic environment is essential, as is understanding proper levels and modulation, proper mic technique, and understanding and practicing editing and processing. Technophobia must be overcome.  Third, Business. You have to master basic marketing, accounting and knowing when to ask for help.
Nothing beats being your own boss. This is a great time of opportunity. However, it just doesn’t “happen.” You have to make it happen.
““““““““““““““““““““““`

Wanna know more? Check out Dan’s upcoming webinar on Voiceover Xtra on Tuesday,  December 10. On Tuesday night, December 10, 2013, Home Studio Master / Audio Wizard Dan Lenard sweeps in with a Home Studio Wizardry Webinar to chase away your tech demons – and to purge your studio of those creepy, evil things that keep you from sounding like the voice over pro you are.