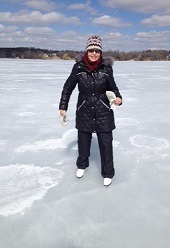 After the winter much of the US endured, I learned a lot after all the years spent in Southern California. Never take the forces of nature for granted.  In California, we had earthquakes and fires. Here, we faced an inordinate amount of sub zero temperatures, ice storms and record snowfalls.

And through it all, you need to take in and roll with whatever comes at you. If it snows, go skiing. When it’s too cold to go outside, go to the gym, and cook hot curries for dinner, build a fire and stay warm.  When the conditions are just right, go ice skating.

Now that it’s officially Spring, even though it doesn’t feel like it much outside, today I will most probably ice skate for the final time on the lake today. It’s really nice to have a lake outside the door.

When the forces of nature push against me, I make myself push back.
Here I am, a voice actress, auditioning like mad, under seemingly unachievable timelines  and essentially being told “no” most of the time means I have to work harder.

Our voiceover world has changed, so much so in even the last five years, especially when notable and iconic VoiceOver royalty come to the forefront in the news, it creates a higher than ever profile of the industry and the numbers of new aspiring voiceover hopefuls explodes.

I recently heard there are now 1.2 million voiceover actors throughout the world, and the number is growing. Many  are told they have a good voice and that they should pursue this work, and that it’s all talk and oh so easy. They believe that they can take some workshops, be fed a bunch of promises to amp up their dreams,  be possibly told they’re ready to make a demo after spending a lot of time effort and bucks and believe that the work will magically appear in their mouths.

The reality: You have to learn that this is a fast-paced business that can chew you up and spit you out as soon as it has said hello to you. So become a force of nature and write your own history.
Staying relevant is one way of being a force of nature.
Knowing and embracing who you are is another way.
Being passionate about the craft of voiceover  is another.
Being a good businessperson is at the heart of any long lived enterprise.
Loving the challenge of hearing “no” is what it’s all about. And work harder. Don’t give up.

Becoming a force of nature; It’s a major continuous kick in the seat of the pants that not all have the guts to endure.

To stay a force of nature, you must work hard to know and understand it, adapt to it, stay grounded, and be sure to have fun with it! Our  work is quite joyous and we are at our best when we are free to play.

I read a fascinating interview with Joaquin Phoenix, the star of the movie, Her.  He says, “It’s good sometimes to not be welcomed. If everyone said, welcome, welcome, welcome, it could be dangerous. What I want most is to challenge myself, and I’m lazier than anybody. Wouldn’t you just like to float in the water a very long time? I would, but that’s no good.  You have to battle, not to float. “