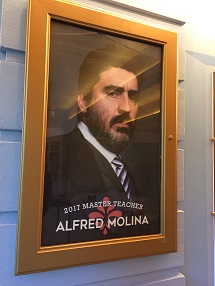 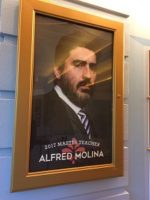 So, it’s a fabulous July 15, 2017. The beautiful Wisconsin summer weather that evening was pitch-perfect. Ten Chimneys is the estate lovingly created by Broadway legends Alfred Lunt and Lynn Fontanne. It’s also a National Historic landmark.  And Ten Chimneys not only celebrates the one-of-a-kind collection the Lunts amassed during their lifetimes, but also honor the values found in every corner of the Lunts’ lives. Thus, it’s a celebration of sorts, both on the stage and in the house they called home for more than half a century. Many legendary actor friends of Lunt and Fontanne came to visit Ten Chimneys. As I walked through the program center’s  theater lobby there were several museum pieces of the actor’s lives on display. Most notably, the sense of theater acting history was overwhelming.

The Lunt-Fontanne Fellowship program is described as a “ground-breaking” national program to serve American theatre. Every year, 8-10 of the most accomplished regional theatre actors in the country are invited to participate in a weeklong master class and retreat with a world-renowned and respected Master Teacher. The 8-day immersion at Ten Chimneys includes intensive daily master class sessions, both in the historic rooms of the estate and in the modern facilities of the program center.

“The top actors in from various repertory and other theater companies in the country are given a rare and deeply needed opportunity to grow artistically, renew their passion for their art form, deepen their commitment to mentorship, and form a national community of Lunt-Fontanne Fellows. These actors return to their home communities more inspired, and more inspiring — offering great benefits to other actors, to individual theatres, to students, to communities across the country, and to American theatre as a whole. Ultimately, this program does not exist simply to serve actors, but to strengthen the ability of actors and theatres to enrich people’s lives in communities throughout the country. Lunt-Fontanne Fellows do this as artists, as mentors, as teachers, and as leaders in their communities.”

He has featured roles in many classic and hit  films, including “Raiders of the Lost Ark”, “The DaVinci Code”, and “Spider Man 2”, plus numerous television series. View his IMDb page here.

I am lucky to have attended the concluding program to view the work the students underwent all week. They performed scenes, many in the very early stages of development and direction. Between each scene, the actors were quizzed by Alfred Molina on various points of performance.

Alfred Molina explained to us audience members that this week of Master teaching was all about:

In conclusion, I feel such wisdom transfers well into the voiceover realm.

Lastly,  I hung out again in in the program center lobby, to soak up more inspiration.  I spotted a postcard on display, with a quote that I hastily wrote down. This resonates with me, as a voiceover actress. The quote is from a mentor and acting coach of Lynn Fontanne, Ellen Terry on “The key of acting” : “Think of the MEANING of what you are saying and let the words pour out of your mouth.”